For those paying attention, having done sensible serious research and enabling the connection of dots accrued from many incidents there stands out by a mile, specific  human hands delivering preordained goods.

In the light of the assassination of the Archduke Ferdinand, only very few working at 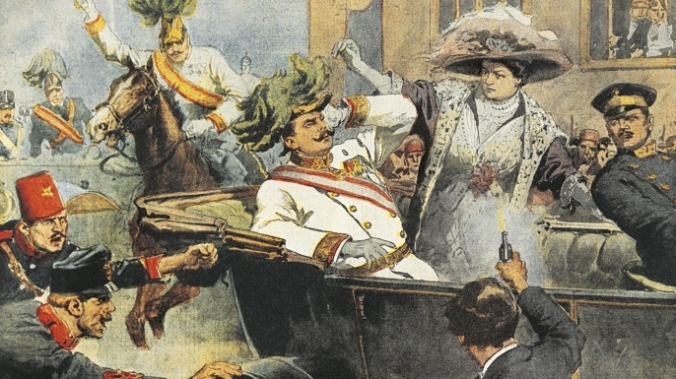 this level of attention recognised events for what they were. It became imperative for them to  keep heads low and expose little publicly. What flowed from this much acknowledged set up or in today’s parlance, false flag event are at least two world wars, huge division all the way forward and an overarching tighter control of government and financial aspects of world events by a tight knit group who remain unknown in entirety but visible through its various parts.

By the time 9/11 happened the world had changed so dramatically it was immediately possible to see something very stinky and far reaching was in process.

Roll back the years to when John F. Kennedy was assassinated and we see the hand of 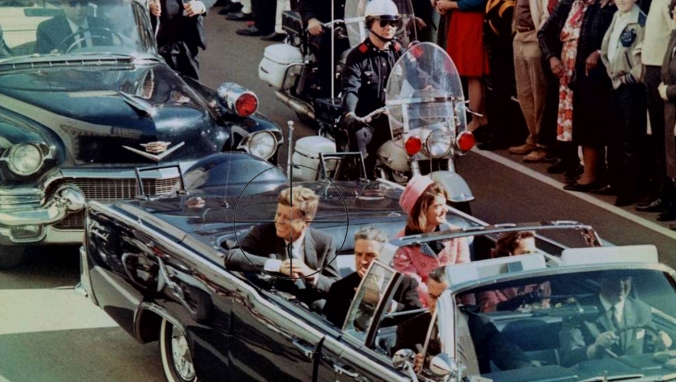 the elite, through their linked chain of CIA,  swiftly bringing to bear a massive campaign to create a ‘silencing’ of any views threatening the official tale. The inside job being perpetrated by deep government, external foreign elements, in the form of terrorist Cuckoos and those running the financial system were on mission big time and out of control.

‘Silencing’ was achieved through the introduction of a term now common parlance labeling all who questioned the official story as ‘conspiracy theorists‘. It would come to pass that all who engaged in this sort of approach would be labeled as such and thus all counter argument was neutralized. As the term became more and more inculcated into the vernacular, it took on the description of someone not to be believed, a crazy, a 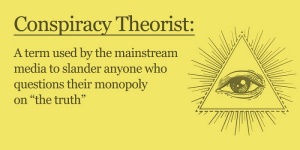 creator of fabricated tales and scenarios. The reality that other opinions may as well have held justifiable content to research was neatly consigned to the trash sand the elephant in the room, that the official story was the real conspiracy, is neatly whitewashed.

Its success, through a totally compliant media loving the shock and awe of a super slick put down, engaged the public perception, who still largely believed they had an honest medal. They were easily fooled to lap it up.

With the arrival of alternate views disseminated through the Internet, bypassing standard media delivery systems, it became apparent other forms of put down and 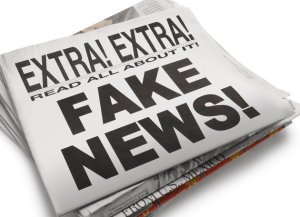 silencing had to be employed. Thus the term ‘Fake News’ was created in the same vein forcing the idea any viewpoint other than the officially narrated one was fake. This would force itself into the consciousness of a largely befuddled collective mind and seal the handed truth. The fact fake news mostly emanates from the very media promoting this line was supposed to be tossed aside as ridiculous.

In today’s world this while process has become the new War. A War for our minds. These procedures, and there are many other examples too numerous to annotate, are finding it ever more tricky to silence dissent, ever more chaotic in changing the enfeebled narrative and most importantly, allowing truth to be broadcast and heard by ears accepting to hear a different take on matters.

In the days and months leading up to and following the Crash of ’29, confusion, panic and fear were powerful enough to prevent serious acceptance of truths that would take  years to reach a wider public. My own part in exposure had the predictable pattern of ‘wipe out the trouble maker’. Being an avid researcher and having studied these things from both sides of the fence, my own exposures were done in the fullest knowledge that having raised my head above the parapet I would be heavily shot at.

However I digress, for what is faced here in the 21st century is a far more pernicious beast that demands above all critical thinking, awareness and an awakened and open mind. For too many the comfort of not entering these territories is too appealing, yet truth be known, by that very action we doom ourselves to slavery at best and extinction at worst.

Although there are many incidents that can be analyzed successfully, I offer a very recent example of the Empire swiping at and playing hands in desperate attempts to retain control of situations, when so many efforts at control have failed, on the largest stage of all – global.

A local crowd can be shut down by police, military and the like. Previously that would have worked on a national scale. That we have been blasted with propaganda to persuade us all that an Empire, no matter whose, is invading, fighting, killing and randomly targeting hundreds of thousands if not millions for the cause of “Freedom and Democracy” is so transparently ridiculous as to awaken more and more to the real agenda at play. The Military Industrial Corporate Complex gasps for oxygen using its self created tools to gain the ends.

It is not working, so obviously, as in every other single causus belli, the financial sector is played out to collapse, be manipulated and used as ultimate raison d’être for war. Confuse them first with clowned and highly controlled Presidents, divide them with EU breakups and then play those aces, illusory but believed to exist in final lock down. That it may mean a huge percentage loss of life has never been a pause point in the psychopathic mindset of those playing these end games.

Yet before that happens a play out takes shape. Let’s see how the herd reacts when we

start cutting life essentials. Thus the recent blackouts in the USA in New York, Los Angeles, San Francisco, Seattle, and to a far lesser extent Dallas, Houston, Minneapolis, Chicago, Washington and Boston happens. Media rallies to ‘fear up’ the drama in the way they do best. All the usual excuses are rolled out after the event however the task having taken place,  results noted, the ground is prepared for future shock!

Another event seemingly unconnected – the gunning down of a Paris policeman by the usual “terrorist sympathiser/affiliated” suspect might be viewed as another bite back from illegal messing around in the Middle East, yet that this young policeman is found to 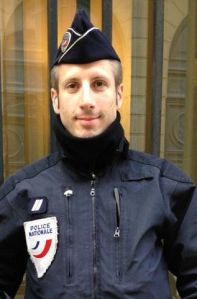 have been a witness to the Bataclan Theatre in Paris set up offers an opportunity to neatly dispose of a leaking vessel through the obvious ‘revenge’ motives of a useful pawn of dubious origin.

As much as this might be seen as stretching credulity too far, the amount and repetitiveness of so many other false flag events in this vein, make it perfectly plausible. What is certain is there is a desperation afoot in events unfolding calling for ever more transparently obvious staged ‘atrocities’ to shore up a story becoming more unbelievable as eyes open and a previously believed narrative falls on its own sword of deceit.

Hollywood has conditioned minds to buy into unlikely scenarios, prepared them to accept ever more ghoulish murder, psychotic behaviour and retribution as par for the course, there comes a limit when actual bite back reality begins to threaten an audience previously held under the spellbound belief they are impervious to threat or real danger or that the belief offered is so outrageous, it births incredulity and deeper questioning.

Add into this confused mix the unknown and unpredictable ways Mother Nature and solar weather operate and you have the greatest EMP (Electromagnetic pulsing) threats freely performing, surmounting anything human machination could conspire to create. All the devious human mind can do is make us believe a natural occurrence is in fact man made. Anything else is so far out of their control as to terminally threaten their power base.

There will always different levels of education of events yet one thing is a certainty – the more we question and receive no valid, truthful or plausible answers, the more we doubt the powers we have placed in control. At these moments even ill educated folk stand up and give these powers a huge finger and use what has always been considered as a useful panacea – the vote – to place a humongous fly in the pure ointment of the elite’s bullshit and lies.

Everything cracks and crumbles, everything  disintegrates and disappears so that new growth, fertile beginnings can be birthed. To witness this natural cycle on the scale we are presently facing can only be described as truly awesome.

The fly we ourselves must protect from falling into the present ointment is our fear. This 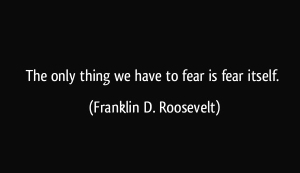 one constituent, both necessary and essential in a natural world, when aroused and baited by actions promoted as real to stimulate unwarranted fear in us, is the single weakest link in, not only our battle for survival but for the potential to win through, turn the tide and become closer to our true nature of who we really are and to live that reality.

So it is good to remember, whatever they throw out as real, however much it may justify lock down, the robbery of what remains of our humanity, is merely the intention of a virulent evil on its deathbed, refusing to accept termination on the pyre of human mockeries it has itself created.

“There is no such thing as coincidence. It exists merely for those refusing the math of universal patterning”  Nikola Tesla 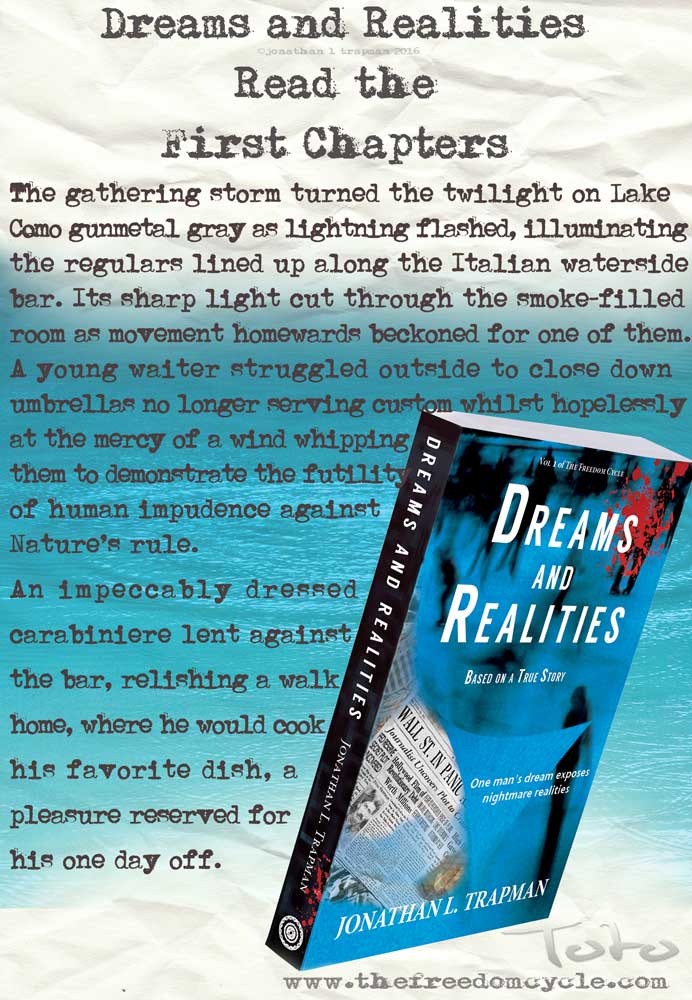 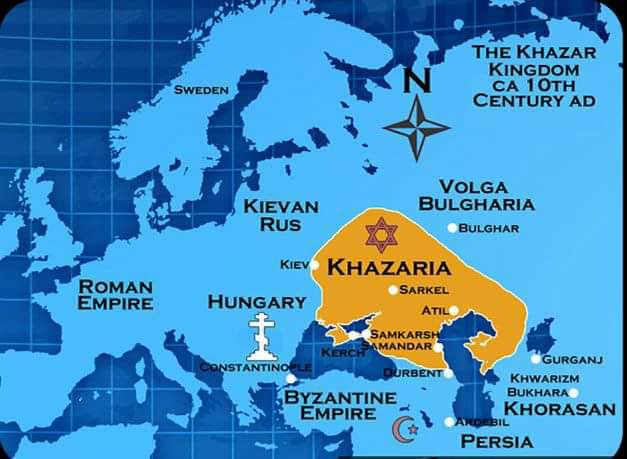